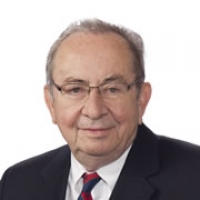 Bob had a love of life that was contagious. His many joys included travel (especially skiing), photography, coaching soccer, music, German sports cars, Italian attire, collecting hundreds of frogs gifted to him by his many friends, spontaneously reciting poems, and sharing uplifting stories; most of all, he loved his girls: Libby, Lucy, Amy, and Maddi.  He will be remembered for his sense of humor, charm, solid ethics, wit, fairness, compassion, and problem solving ability.  With a rare combination of lovability and capability, he never had to tell anyone how smart he was, but everyone knew.  He could “work the room” in such a way that it was clear he wasn’t actually running for anything.  His philosophy was that “it was a bad day when you didn’t learn something new.”  He had a team spirit, and brought out the best in those people fortunate enough to know him.  Bob is survived by his wife of 59 years, Libby; his daughter Lucy Elizabeth and her husband, Kenneth Lambert; his daughter Amy of San Francisco, and granddaughter Madeline Riley Hendrick.

Robert Lewis Meyers, III was born November 2, 1936 in Lubbock, TX to Rubie Cleveland Meyers and Robert L. Meyers, Jr., and died July 11, 2020 in Dallas.  Bob was an only child, and spent his youth in Jal, New Mexico; Los Angeles, CA; and Levelland and Lamesa, TX; before finally settling in Dallas, graduating from W.H. Adamson High School in 1954.  While at Adamson, he was a member of the National Honor Society, All-City Orchestra (trumpet/cornet), band, choir, and the debate team.  He earned a B.A. in French Literature from Southern Methodist University in 1958, where he was on the debate team and a member of Tau Kappa Alpha and the Blue Key National Honor Fraternity.  His choice of major, he claimed, was mostly because he liked the professors.  He remained at SMU for his Bachelor of Laws degree, graduating with honors in 1960 as a member of Order of the Woolsack, Delta Theta Phi legal fraternity (Scholarship Key), and the national moot court team, and also served as a coach for the undergraduate debate team.  Bob began his legal career as a prosecutor with the United States Air Force JAG corps at Carswell Air Force Base, where for two straight years he amassed the greatest number of successful prosecutions among all of the JAG officers nationwide; he left the service in 1963 with the rank of Captain.  During his time at Carswell, he married Elizabeth Ann Robnett (Libby) on June 30, 1961.  Subsequent to his Air Force service, they moved to Dallas when Bob joined Akin Gump where, as he described it, he “carried Jack Hauer’s briefcase.”  From there he became General Counsel for the George A. Fuller Co. and the OKC Corp. before joining Stalcup, Johnson, Lipshy & Williams.  That firm evolved over the years into Meyers, Miller, Middleton, Weiner & Warren, which in turn became the Dallas office of Jones, Day, Reavis & Pogue, where Bob managed the firm’s worldwide construction practice for 25 years.  He remained as a partner at Jones Day until his retirement, after which he practiced with his daughter Lucy as Of Counsel at Ford, Nassen & Baldwin.  During his lengthy career as an attorney, he was involved in the construction of many of the iconic buildings of the Dallas skyline, the International Terminal at JFK Airport, the San Francisco Embarcadero Center, and the Los Angeles County Alameda Corridor, as well as major projects of every conceivable type, from hotels and golf courses to healthcare and manufacturing facilities, all over the world.  Whenever he could, he would include his family on business trips to some of the more interesting locations.  A nationally known legal expert in construction-related matters, Bob was a contributing author to several books and legal periodicals, and wrote and lectured extensively for the Practicing Law Institute and American Bar Association, among many other organizations.  He was President of the American College of Construction Lawyers; chair of the Texas Bar Foundation Fellows, Dallas Bar Foundation Fellows, State Bar College, ABA Condemnation, Zoning, and Property Use Committee, and the Construction Law sections of the American, Texas, and Dallas bar associations; and board member of the Texas Center for Legal Ethics and Professionalism, the Center for American and International Law, and the SMU Dedman School of Law.  He has also been honored as a Distinguished Alumnus of the SMU Law School.  Bob served in numerous charitable fund-raising endeavors, most notably as chairman of the lawyers’ and professional divisions of the United Way Campaign.  In lieu of flowers, donations in Bob’s memory may be made to the Dallas Bar Foundation Sarah T. Hughes Diversity Fellowships, or a charity of your choice.  A private graveside memorial was held, with a Celebration of Life to occur at a later date.