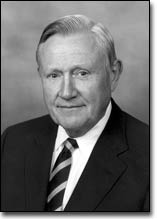 Frank Hampton McFadden died peacefully December 28, 2020 at age 95. Judge McFadden was born on November 20, 1925 in Oxford, Mississippi and spent his early life on the family farm with his six siblings in the difficult years of the Great Depression. In 1944, he joined the Navy, which would prove to be one of the defining experiences of his life. Though he was a commissioned officer before he ever saw the ocean, he excelled in his role as a gunnery officer on battleships and heavy cruisers. In 1949, he returned to Oxford and graduated from the University of Mississippi. He attended Yale Law School, from which he took a voluntary hiatus for active duty in the Navy during the Korean War, and then graduated in 1955. He practiced law in New York with Lord Day & Lord until 1958, when he returned to the South to join what is now the Bradley, Arant, Boult, Cummings firm in Birmingham. There he met the love of his life, Jane Nabers, and they were happily married from 1960 until her death earlier this year. In 1969, he was appointed US District Judge for the Northern District of Alabama by Richard M. Nixon, becoming Chief Judge in 1973. In 1982 he resigned from the bench to return to the practice of law as General Counsel for Blount, Inc. in Montgomery. After retiring from Blount at age 70, he joined Capell & Howard in 1995 and continued to actively arbitrate and mediate disputes as late as 2018, at age 93. He was a member of the American Bar Association, participated in the ABA’s Forum on Construction Law, and was instrumental, along with others, in the creation of the Public Contract Law Section of the ABA. In addition, he was an active member of the American College of Construction Lawyers well into his 90’s. Judge McFadden served his community over the course of his life. He strongly believed in the importance of education and chaired the Alabama Education Study Commission in 1990. In Montgomery, he served on the board of Holy Cross School and the vestry for Grace Episcopal Church. He was a member of the Kiwanis Club of Birmingham, The Redstone Club, and the Mountain Brook Club. Frank had a deep love for horses, dogs, and the southern land. He fox-hunted with the Midland Foxhounds most winter weekends for decades, hunted ducks on four continents, and sought out the wild when possible. He was an avid student of history with endless curiosity about the world, and he always had a wonderful story to tell. Some of the best of these recounted naval operations and smart bird dogs. One even involved fixing a mule race as a teenager. He was fond of quoting Winston Churchill, and as Sir Winston would say, Frank was “happy in his habitation” sitting by a warm fire, surrounded by friends and family. He was formidable but kind, and quite a few beyond his children considered him a father figure. He died as he lived, on his terms and unconfused about the correct course of action. He was of a generation that saw unprecedented horror and possibility in life, and he made his way fearlessly. We are not likely to see another one like him. Frank was preceded in his death by his beloved wife, Jane, his parents Ruby Lee and John Angus McFadden, and his siblings, John Angus Jr., Edmond Roy, Ruby Lee, Imogene, and Ellen Joyce. He is survived by his brother Joseph Tedford McFadden, his children Frank Hampton McFadden, Jr. (Harriet), Angus Nabers McFadden (Kristin), and Jane Porter McFadden (Patrick), and his grandchildren, Frank Hampton McFadden III, Frances Kendrick McFadden, Everett McFadden Lakey and Jane Maren Lakey. The family offers deep gratitude to Benita Fay, Vinnie Billingsley, Juliette Orr, and Kimberly Poole, who helped Frank through the last months of his life, and to George Shearer, friend and companion, who took Frank wherever he wanted to go after Frank could no longer drive himself. A private burial will be held on January 4, 2020, to be followed by a memorial service when possible. In lieu of flowers, memorial contributions may be made to Children’s Hospital of Alabama, Cornerstone Schools of Alabama, Montgomery Area Non-traditional Equestrians (MANE), or a charity of your choice.
[Published in The Birmingham News from Jan. 2 to Jan. 3, 2021.]