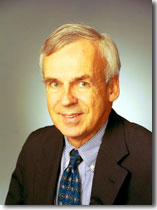 Has presented seminar speeches to public groups and clients on the subjects of construction contract claims, bonds, contract clauses and negotiation, and arbitrations and mediations.